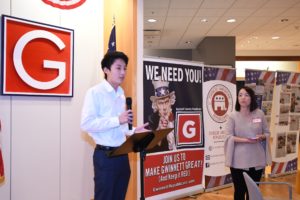 Hey everyone, my name is Daniel Liu. I am a sophomore at Walton High School, and I was the other reporter at the RNC event September 28th. I was in charge of interviewing the volunteers and they were all enthusiastic about the event. Some volunteers I interviewed before and after the event and I could tell that the event had an impact on them. For example, some volunteers told me that their main reason for attending the event was the volunteer hours. Afterwards, they said that they want to help out more for the Republican Party and couldn’t wait for the next event. From the event, I learned a lot about being a leader. I took a way 3 important things: passion, communication, and openness. I have heard about these 3 qualities, but I built on these ideas at the RNC event. 1) If you’re not passionate about what you are doing, you have already lost because you won’t put in the work to be successful. 2) If you don’t communicate with others, how can people know about your goals and aspirations, which is why people need to spread the word about what the Republican Party believes in. 3) If you are not open to other ideas, then you won’t be able to compromise with others on issues, which will lead to disputes that hurt both sides. This is part of the reason why there is such a huge partisan in the federal government currently. Me and Larry, who also attended the RNC event, with the help of friends, are planning on going door-to-door and telling people why they should vote for the Republican Party, and why they should come out and vote. If even a fraction of the people who we tell vote for the Republican Party, it will be a success.